Skip to content
Welcome beautiful! Chat with us if you need help :)
FREE DHL EXPRESS TO AUSTRALIA ON ALL OVERS $220NZD+
Free NZ Wide Shipping on All Vintage + Sneakers!

The Letterman Jacket was first invented in the 1930's when athletes needed heavier jackets to beat the colder days during training and between games.

Not everyone was able to acquire their university's Varsity jacket though, and the letterman jacket became a status item within universities.

The letter wasnt for everyone and had to be earnt. You earnt it through performance on the field. Once you got it you could sew it onto the jacket, it was very serious & bragging rights earnt.

This had been then taken hold in all Ivy League universities – a group of the 8 most prestigious private universities in the United States  in high schools and all other colleges in America. It was during this period that the term “Varsity Jacket” was born and became popular, and all athletes at the various schools (college or high school that they were) wore one.

It was in the ’80s that the popularity of the varsity jacket exploded definitively thanks to the attention it aroused in the professional franchises of American sports.

Fashion and Streetwear took ahold of this Jacket and made it their own. With superstars such as Michael Jackson, Run-D.M.C and N.W.A wearing them frequently, it wasnt long til its popularity reached streetwear and was worn in fashionable style, rather than being earn through years of sports.

Stussy was one of the first brands to manufacture a fashionable Varsity and it blew up even more from then onwards. Varsity jackets are very sought after in todays fashion. Vintage Wool Varsity's are the most sought after. We believe its because theyre sick as f, and a great piece to dress up or down, along with the jacket being worn in, warm as heck, featuring history and comfortable to wear for long periods of time.

The ultimate all round Jacket - Vintage heat - Fashionable and instagram worthy. Let customers speak for us

Was Definitely up for the risk buying a mystery box, but was pretty happy with my 2 tee's. Recommended if you'd also like a surprise!

It's perfect ! Can't fault it at all and I'm already getting compliments about it ! Again thank you so much ! Look forward to my next purchase 😁

Absolutely love it !! Love the weight it has and it just feels so comfortable to wear !! Thank you so much 😁

Thank you very much love them 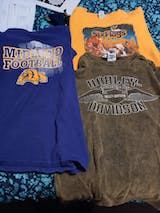 Thank you, like our new t-shirts and looking forward to wearing and sharing them with my whanau.

First time buyer, will definitely buy again. Love the mystery box, full of surprises. Great service and small business to support! Thanks so much 🤍

I thought I was getting graphic Tees, But I was Guttered, But the T shirts I was Happy with. I ended up giving the brought items, I gave to my Dad and He loved it. will choose carefully in future. other then that Happy with my purchase made.

Its a shame you were guttered! Our first time hearing disappointment as we pack bangers into the boxes and send way more in $ value! Was it just a mistake of buying the mixed box instead of T-shirt box? Ideally next time if were after certain styles definitely the best option to leave a note in the cart so we can look after you closer to your tastes or select individual pieces. Just a bugger for us hearing disappointment as we really want to make the box the best possible for you! If your really unhappy shoot us an email and we can offer an exchange for you, But thank you so much for the support and feedback you gave us, hopefully we can see you again :)